GURUVAYOOR AND ATHIRAPALLY: A TRAVELOGUE

Posted on September 3, 2010 by The eternally happy Vijay 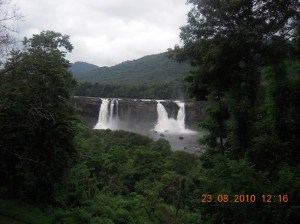 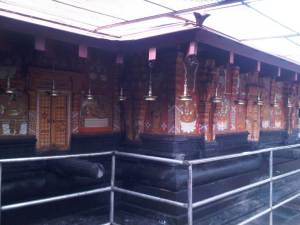 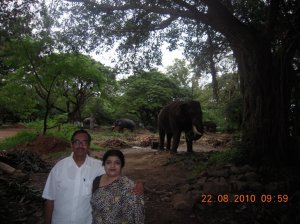 A four hour drive from Coimbatore through the verdant landscapes of Kerala led us to the temple town of Guruvayoor, the famed abode of Lord Krishna. The drive took us past several small villages in Kerala which have grown in a serial sequence such that one town actually fades into the successive village. There were two interesting features which arrested our minds: one was the hamlet of Valampuri which is just on the outskirts of Coimbatore (about forty minutes drive), but located in Kerala, which boasted of the largest statue of the NANDI (the bull which served as the vehicle for Lord Siva) which I have ever seen and the second was the incessant honking of the huge buses which seemed to be in a tearing hurry to get to their destinations. It would be relatively easy for a first time traveler to get an impression that these buses were intent on colliding with or running over everything else on the narrow roads.

We also made a brief halt on the roadside to pay obeisance to a small but apparently well known temple of Lord Ayappa. Our driver told us that he would stop the car a little distance away, since there was a practice of people throwing coins from the moving vehicles and this had caused many a windshield crack on the cars which had been parked in the path of the travelling “coin missiles”. Having averted such an incident, the rest of our journey to Guruvayoor was without much excitement.
Like all other temples in Kerala, there are strict dress codes for entry in the Guruvayoor Temple. Men are allowed only if they are uncovered waist upwards; it has been only a few years that the dress code for women was expanded to allow churidars; till then, women necessarily had to wear sarees. The temples in Kerala are very different from the other temples in the remaining South Indian States. There are no ornate sculptures, there are no electric lamps inside the sanctum sanctorum, all the light being provided by the visually delightful arrangements of the oil lamps and the roofs have a pyramid or conical structure. The walls of the main temple inside are adorned by symmetric arrangements of oil lamps and when lit, this is a sight which gets etched deep in our memory banks. Instead of the sculptures, we were treated to the sight of beautiful murals depicting the story of Lord Krishna on the walls. Another unique feature is the importance given to elephants in the various events of the temples. A short distance from Guruvayoor, in Punnathurkota, we were treated to a visit to the elephant hostel, which has well over 70 elephants as its inmates! In Guruvayoor, we also saw a life size statue erected in the memory of Kesavan, the most popular temple elephant of Kerala. Kesavan was above 3 meters tall and was known for his devout behavior and the services rendered to the presiding deity of the temple. Kesavan died on “Guruvayur Ekadasi,” considered a very auspicious day. Our driver mentioned that on the day of the elephant’s passing away, the animal fasted for the entire day and dropped down facing the direction of the temple with his trunk raised as a mark of prostration. The death anniversary is still celebrated in Guruvayur in a function in which a number of elephants line up before the statue and the chief elephant garlands it. Kesavan has also been conferred the title of “Gajarajan” (Elephant King), by the Guruvayoor Temple authorities!

A short distance from this elephant camp is the not so well advertised Mamiyoor Temple for Lord Siva. Legend has it that during the last flood of DWAPARA YUGA, Lord Krishna’s abode in Dwarka was totally consumed by the swirling waters and Lord Krishna, in His infant form, was found floating on a leaf by Deva-Guru (also called as Brihaspati: God of prayer and devotion) and Vayu (God of Wind) who wanted to consecrate a new temple on the banks of a lake without being aware of the fact that the site they had chosen was already consecrated for Lord Siva. But Lord Siva, who heard about these plans, graciously volunteered to shift his abode to Mamiyoor, about 3 kms away to facilitate the abode of Lord Krishna being built at what is now called Guruvayoor (the town of Guru and Vayu)! It is therefore felt that a pilgrimage to Guruvayoor is not complete without paying obeisance to Lord Siva in Mamiyoor, without whose sacrifice, Lord Krishna would not have got his new abode!

When our driver was driving past the town of Thrissur, he mentioned in passing about the Vadukunnatha temple and as was to be expected, we asked him to take us for a brief visit; the area on which this temple stands is huge and it is well known for the largest assemblage of elephants in the famous Thrissur Pooram.
Athirapally, which is well hidden by the thick vegetation, has come into more prominence of late because of the scenic beauty which has been captured so beautifully in Mani Ratnam’s Raavan. The entire crew and cast had camped for nearly three months in the only hotel in the area which is called Rainforest. There are just 10 rooms in the hotel and each room has a frontal view of the falls. The shower area in the room is separated from the main bedroom, but curiously enough, the shower enclosure has no door! Perhaps this was done to facilitate the inmates to get a feeling of bathing in the waterfall itself, because, the fall is visible from the shower enclosure as well! We trekked a short distance close to the falls and were treated to the lovely sight of the waterfalls which appeared to have been untouched by the commercial crowds because of which the place seems to have retained its pristine nature. Usage of plastic is forbidden and there was no evidence of the muck which one gets to see in many other Indian sightseeing spots.
Our last halt before we boarded our flight at Kochi was Kalady, just about 10 km from the Kochi Airport. Kalady is well known because it is the birth place of the revered saint of the 8th century: Adi Sankaracharya.
A stupa like structure built a couple of decades ago stands as a fitting monument to the memory of this learned Guru. The top of the stupa can be reached by climbing 168 steps, and as one climbs the steps, the story of Adi Sankaracharya unfolds on the walls on the right. Were it not for our all knowing driver, we would have missed out on this rare opportunity!
Just before we reached Kochi airport, I narrated a joke (which was sent to me by one of my colleagues) to our driver about how a group of foreigners had travelled to various countries in the world and were charged heftily to make phone calls to God. The group then descended onto Kerala and was surprised that for a similar task, they were charged a pittance. They were aware that the telephone tariffs were a lot lower in India, but even that did not explain as to why they were charged as though they had made local calls. I could see my driver’s face swell with pride and he couldn’t resist providing the reason himself (which I was supposed to provide as a part of the joke). He said: The foreigners perhaps had forgotten that they were in God’s Own Country; obviously any call to God from here would be a local call! And he winked at me, let out a loud laugh and bid good-bye!

About The eternally happy Vijay

7 Responses to GURUVAYOOR AND ATHIRAPALLY: A TRAVELOGUE